Senior partner and this firm’s founder, Clifford Oxford, passed away on February 27, 2007 after a legal career that spanned almost seven decades. A short list of his professional and civic accomplishments during his extraordinary career include: President of the Atlanta Junior Chamber of Commerce (Jaycees) and while serving as President, chaired the committee which succeeded in obtaining the passage of legislation to unmask the Ku Klux Klan in the City of Atlanta; military service during WW II and the Korean War; one of the founders and service as President of the Georgia Association for Mental Health; President of Atlanta Voters League, the Heritage Foundation, and the Board of Managers of the Downtown YMCA in Atlanta; President of the Sigma Pi Fraternity Alumni Association, the Reserve Officers Association and the Atlanta Voter’s League; President of the Buckhead Kiwanis Club and Lieutenant Governor First Division, Kiwanis of Georgia; member of the Board of Governors of the Georgia Bar Association for 19 years and awarded their Distinguished Service Award. Cliff was instrumental in the annexation of 100 square miles to the then 25 square miles of the City of Atlanta, and the fluorination of Atlanta’s water supply.  He was a major player in the founding of the Georgia State University College of Law in 1981, and in 2001, the GSU College of Law presented Mr. Oxford with its eighth Ben F. Johnson Public Service Award, which honors a Georgia lawyer whose life reflects selfless public service. 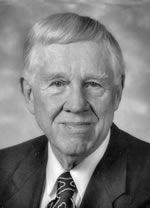